Most of us living in northern climes suffer from vitamin D deficiency, particularly in the sun starved winter months. Vitamin D is essential for the immune system, strong healthy bones and teeth and the absorption of calcium. More recently it has also been found to help to regulate hundreds of genes.

According to a recently completed study, “Mushrooms exposed to the sun can provide as much vitamin D as a health supplement”. In the study, 30 adults were given a daily capsule for 12 weeks containing either 2,000 units of vitamin D, or sun-exposed mushroom powder with high-levels of the nutrient. At the end of the trial, there was no significant difference in the participants’ vitamin D levels. The lead author Dr Michael Holick went on to say that, “ we found that ingesting mushrooms containing vitamin D2 was as effective in raising and maintaining a healthy adult’s vitamin D status as ingesting a supplement that contained either vitamin D2 or vitamin D3”. These findings were presented at the American Society for Biochemistry and Microbiology meeting in Boston and also published in the journal of Dermato-Endocrinology. Dr Holick also stated that mushrooms continue to produce the nutrient even after they are harvested as long as they are placed in direct sunlight.

Another study at Penn State University found that by exposing a single serving of mushrooms to direct sunlight for an hour or two anytime between 10AM and 3PM will boost the vitamin D levels to provide 824% of the recommended daily value for an adult. Interestingly that figure was just for white button mushrooms, oyster and shiitake mushrooms achieved even higher multiples.

For those of us who consume wild mushrooms it is likely that the sunshine boost is already present assuming they have grown in natural light conditions. Furthermore it seems that there is no significant decrease in the vitamin D levels caused by drying and/or cooking mushrooms.

This is a quite time of the year for Fungi, however there are still a few treats to be found in the woodlands. Specifically the Velvet Shank the Scarlet Elf Cup and the Oyster Mushroom. All three are tasty and relatively easy to identify. The oyster can vary significantly in colour from grey to yellow. 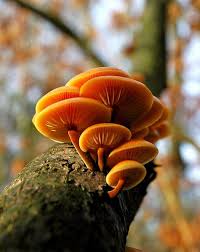 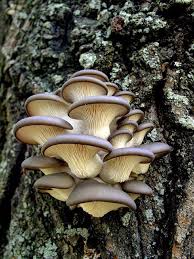 So keep an eye out for these wild mushrooms, also for wild garlic which is starting to sprout a lot earlier than usual. I like to use it to flavour my homemade vinegar and even add to my kimchi pot.